This is a post about why – and how – we let our kids (3 and 5) spend up to three hours at a stretch playing with smart phones.

I know! I totally shouldn’t admit that in public. Guidelines say no more than thirty to sixty minutes a day or they’ll grow up to be myopic, couch-dwelling drones, cut off from life and reality. What about poorly-developed social skills, lost learning opportunities, and their eyes, oh their eyes!

But I’ve never liked curfews and I’ve never had one imposed upon me, and the idea that I’d set my kids a “screen curfew” just doesn’t gel. 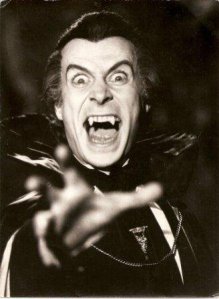 I am prepared to rethink my stance on curfews at the start of the undead apocalypse. Image by Alejandro Lunadei, via Wikimedia Commons.

Of course, we’re not happy to let them roam (metaphorically) about the inter-webs til heaven-knows-when with heaven-knows who smoking heaven-knows what, either – any more than my parents used their anti-curfew policy to encourage the same in us.

We always had to say where we’d be going, who’d we’d be going with, what we planned to do, and when we planned to return home, and they would either approve the plan wholesale (even if it meant getting home closer to midnight than 9pm), or send us away to revise it.

The thing about not having a curfew, though, is instead of just setting a time limit (clear, simple and easy), you have to decide what you will and won’t approve (requires prolonged late-night arguments with your spouse and the eventual creation of blog posts and infographics). On the upside, I can now share with you this blog post, with infographics. I bet you can hardly believe your luck. 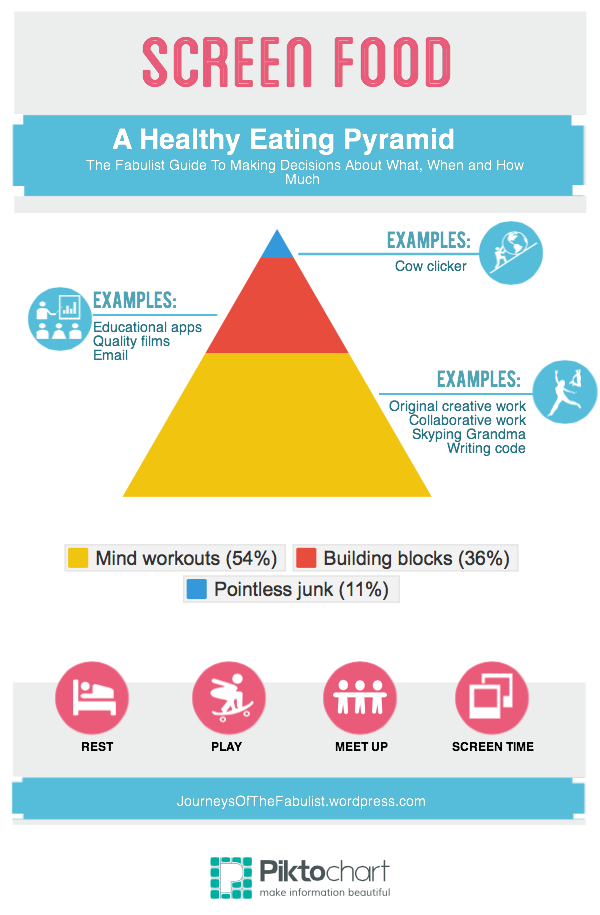 We’ve all seen the healthy eating food pyramid. It’s got the stuff our bodies need most of on the bottom, and least of at the top. Typically (I realise there’s debate, but let me stick to what I learnt at primary school) the foundation is energy foods, because back in the day that’s what our bodies were mostly required to do – expend energy. And in fact, it’s still considered good for our bodies to get out there and work, whether we need to or not.

The middle tier is all about building blocks like proteins, because our bodies’ next most important job is healing and growing. And way up the top is the junk food we can probably do without, only we don’t really want to. 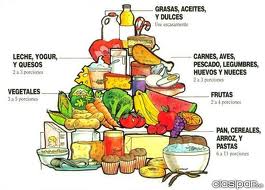 The old-fashioned food pyramid. Image by Nagagym, via Wikimedia Commons.

We tried to base our Screen Pyramid on what our minds need the most of – not just intellectually, but also emotionally and socially. Our philosophy is that the mind, like the body, needs to work.

The second tier focuses on building blocks that help us improve our creative works and grow our social connections – reading good quality sources of information, using educational apps, or setting up play dates on facebook. And the top tier focuses on Cow Clicker.

“Can I use your phone for just ten minutes to play a game which is not only pointless, but irritatingly noisy?” Answer: “As soon as we start serving boiled lollies for breakfast.” Image source.

The Bottom Tier – Workouts for the Mind

A big argument for shutting off the screen is the same one my husband uses when he flies all the way to New York for a business meeting: from a social perspective, there are some things even Skype can’t deliver (apart from, but apparently including, the ability to buy rounds at the bar). “Rich and sustained” social interaction tends to develop face to face.

There’s still room for the judicious use of a screen from time to time, though, and when it comes to exercising the intellect, screens can really shine. On the bottom of our pyramid, we include activities like:

Exercising social and intellectual muscles is all well and good, but we need to build them with something. Non-digital activities can provide great inspiration, but we’re prepared to allow some screen time for consumption of good-quality media and tasks which lead to meaningful social interactions. In the middle of our pyramid, we put: 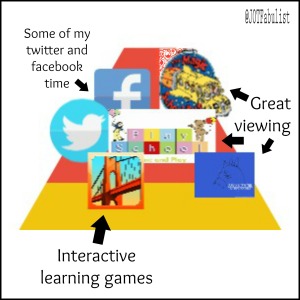 We all have our guilty secrets. I’ll pass up the opportunity to tell you mine in favour of pointing the finger at a former colleague who liked to keep his surgeries on schedule so he could sneak off and watch Coronation Street in his lunch hour. Am I going to swear off ice-cream forever? Not likely. The same goes for frivolous internet memes and strangely-addictive but ultimately-purposeless game apps. I mean it’s analogous, I haven’t literally tried to eat Candy Crush.

But these things are so moreish. It takes discipline (aka a stopwatch) to portion them properly. You know the stuff I mean:

RDI and Calorie Counts May Vary

Applying the healthy eating screen pyramid requires discretion and common sense – which is why I don’t do it in the morning, before coffee.

We all know some fruits, veggies and cereals are dense in bioavailable nutrients, while others contain relatively scant amounts of stuff your body will mostly spit out. Likewise, you can slap up a blog post in ten minutes using only what you already know plus a blurry picture of your cat (although I don’t hate your cat), or you can research, edit and hone it for upwards of six hours per twelve hundred words and four pictures. One is obviously doing more for our minds than the other, even if they’re sort of the same thing.

Also, just as you might need more protein than usual during a growth spurt or convalescence, we think our screen time consumption might not always look exactly like the pyramid, depending on what sort of input our brains need at a given stage of learning.

Plus we shouldn’t eat food all day – even good food. Our bodies need only what they can use. Similarly, I can’t continue to be fully productive at my computer beyond a certain point, even if I am creating a prize-worthy piece. Which I’m probably not. Our TV stays off by default, our devices are all passcode-protected, and we tend to encourage small portions.

But Seriously, Three Hours At Once?

What on earth, etc, etc. Here’s the story: they were working collaboratively (and harmoniously!) on a series of special FX home videos.

They danced. They jumped. They ran around on the grass. They dressed up, created props, and drew sets. They directed each other and negotiated over differences of opinion. They participated in a lengthy discussion about marketing techniques and the true value of in-app purchases. They took turns and got along – after all, they didn’t want me reclaiming my phone.

And interspersed with all that, they pointed the camera, and videoed, and played themselves back. I decided I was ok with it. And also the undead apocalypse – those skeletons know how to party.

A peek at what other families are doing:

Portion sizes getting out of control?

The post Screen Time: A Healthy Eating Pyramid appeared first at Journeys of the Fabulist, and it was totally bottom-tier stuff, all the way. It was featured in the 5th Technology Roundup at Monster’s Ed Homeschooling Academy.