We went in to order P’s school books on the way to the airport a couple of weeks back (yes, we had all our suitcases, it was a comedy of… suitcases…) and the woman at the bookshop recommended some preparatory holiday workbooks. Like, as in, workbooks to do over the school holidays. In preparation. For the first year of primary school.

Of course I declined. Usually when I tell this story I like to add that last sentence in an airy tone, whilst cocking a single eyebrow. Workbooks? For the holidays? Whatever happened to kicking back over summer, enjoying some free time, and maybe relaxing with a bit of an in-car Chinese lesson whilst driving between the library and the art gallery? 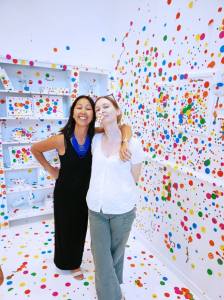 Rene (Together We Roam) is also not that kind of kiasu. That’s why she suggested the library and art gallery.

This Is What Happened To Free Time And Kick Backs

A Little Mandarin offered me their CD to review. I said yes. We actually took the train to the library and art gallery, but that’s not the point.

Was the CD any good?

It was! The vocals were clear (and not annoying) and the vocab level was set just nicely for P, who could understand enough to feel comfortable but not so much that he felt unchallenged. T thought the music was “lovely” and was happy to try and sing along. Toni Wang has done a great job fulfilling her aim of creating a contemporary-sounding children’s album which helps introduce young kids to Chinese.

Well, P was quite miffed to find that the CD contained no music from Star Wars. I argued with him for a short period about the appropriateness of the Star Wars soundtrack for the purpose of learning Chinese, given that it’s essentially a lyric-less score, but he countered that the lack of lyrics make it perfect for people of all languages and at that point I admit I gave up, which may or may not be connected to the fact that he now plays The Imperial March whenever I come downstairs for breakfast, as if I don’t dislike mornings enough.

At A Little Mandarin, the website. Available over there: samples to listen to and lyrics to help you sing along. 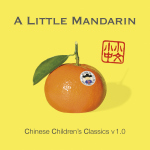 Still to come: that time I pointlessly challenged a nonagenarian to a throw-down over packing lists.

← #Countdown2Xmas: Advent-ures in Calendar Making
I Don’t Wish You A Merry Christmas →