We’ve been married a little over fifteen years and during that time we’ve lived in twelve different homes. That’s disregarding any stint too brief to make it on to a utilities statement.

There was a time when “packing for a move” meant turfing everything from the wardrobe into the hallway between drinks of an evening and “hiring a removalist” meant skulking to the local minicab window in Clapton at 11:06pm, and negotiating a price to come around like, sort of, nowish to take a bootful of stuff across London. A few months ago, I realised that two kids and three plus years at the same address had added up to some serious minicab fares, and a lot more than one evening’s worth of cheap wine.

My first instinct was to start trawling property sites for a new rental. Then common sense kicked in and I realised we didn’t need a new home – we could completely move out and move back in again any time we liked. 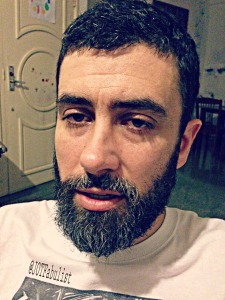 Æ greeted this thought with the expected enthusiasm and high regard for my common sense.

We divided the house into eight sections and we’ve been moving out (and back in again) one section at a time for almost two months. Along the way we’ve uncovered many treasures which are now on display, like the apple-green vespa Æ bought me for my birthday one year: 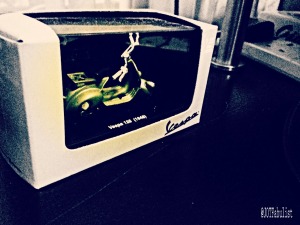 And his little lego Lincoln, complete with Gettysburg Address: 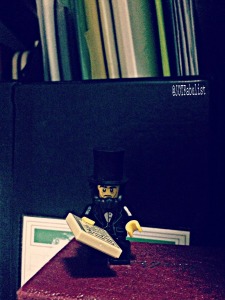 Thus completes my two-photo exposition on our respective personalities.

We also uncovered some treasures we couldn’t keep. Below are two pregnancy tests. The timid, blue line is for P, who still has to be coaxed every step of the way, and the bold, pink line is for T, who still forges straight on, ready or not. But at the end of the day they are also manky, urine-soaked sticks gathering mould and attracting disease. I don’t need to hold on to them any more – the children themselves are evidence enough. But I took this picture: 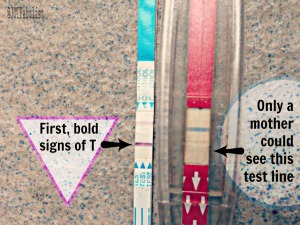 And then it seemed important to share the picture in a blog post. I should probably apologise for this compulsion, on the off-chance you didn’t want to see paper sticks covered in my urine, especially if it’s seven-year-old urine gone mouldy.

The clear-out should end in two weeks. That’s how long I have to decide what to do with my old travel guides, so we can have our reward trip to the SEA Aquarium where we’re going for free, because it’s amazing how much you can buy with utility company reward points when you stay in the one place for three years.

I’d been holding on to our old guides “because they’re like time capsules of what the place was like when we first travelled to them” but I’m not sure that argument stacks up as high as all these dog-eared tomes of outdated information I never, ever reference any more, which are threatening to collapse our whole bookshelf. 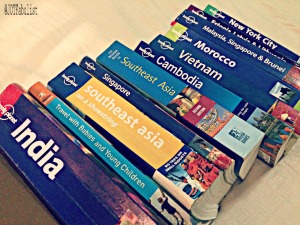 I could still keep them. It doesn’t have to be here – I could send them back in the next suitcase bound for Brisbane to sit in Æ’s old room with the negatives from our wedding which we still haven’t got around to making prints of yet, fifteen years (and twelve homes) later. Nanny’s probably not getting at all tired of storing stuff we haven’t dealt with.

Or I could, well, toss them. Not like they’re of use to anyone else.

I don’t know. What do other people do?