Bits of July: How To Ensure People Listen To You

If you also have this problem, you might want to note down this simple, three-step process which is 94% guaranteed to grab everyone’s attention and make them follow your instructions. 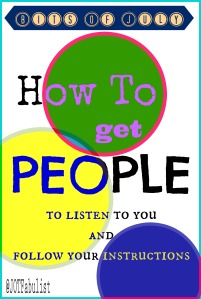 STEP ONE: Precipitate a crisis

The main reason people don’t listen is they think they know better. As if “knowing better” is even the point.

A crisis is a powerful tool for causing people to admit they’re out of their depth. Deliberately precipitating one isn’t easy, though. It requires the right combination of planning and luck – specifically, poor planning and bad luck. (Note: mere lack of planning won’t do.) You can learn more about poor planning by following this blog. The bad luck you’ll have to get on your own.

In a land of panickers, he who remains calm is King. It’s a good idea to cultivate this talent ahead of time, by taking up semi-dangerous pastimes such as rock climbing, horse riding and skiing. Be sure to set your goals several notches above your skill level so you’re continually falling off a cliff, getting hurled violently under the feet of a half-ton of highly-strung beast, or slamming into a tree.

Pro-tip: practice at poor planning can lead to practice in staying calm*.

However (this is key) make sure you cheat death on every occasion, because dead people find it almost impossible to get people to listen to them.

If extreme sports aren’t your thing, you could also try joining an emergency response team, or depriving yourself of sleep to the point where the highest state of arousal you can achieve with a sudden release of adrenalin is “awake”. Emergency staff routinely use both these techniques at once.

This doesn’t have to be true, or even plausible: it just has to be what folks want to hear. If you’re in a position of actual, legal authority, you may want to practice being reassuring without making any promises. Often, the word “alright”, tacked onto the beginning of a sentence, will serve nicely to reassure people without conveying any real meaning, as in, “Alright, we’re going to die.” Of course, if you’re actually going to die you might not care about delivering on promises.

Everyone is now listening to you. May I suggest you don’t abuse this power by telling them to do something freaky or harmful. If you can’t think of an instruction that isn’t freaky or harmful, you can use this opportunity to make people listen to the person most likely to have something intelligent to say.

I found some stuff on the internet in July to illustrate what I mean by “intelligent”, “freaky” and “harmful”. But first…

You, And Other Awesome Things:

Now it’s your turn to name something awesome you read recently and/or go out there and start using the hashtag #ninjascones, which I feel should have some greater purpose.

*Only if you’re lucky.

95 thoughts on “Bits of July: How To Ensure People Listen To You”