The Quest for Kiriake Springs

It was an astonishing journey – a wild goose chase across Nagano Prefecture along icy, mountain roads, in a hired minivan slightly shorter than the prevailing walls of snow – but we were each of us astonished for different reasons. Some were astonished we got there. Others were astonished we returned. I alone was astonished at our failure to create an outdoor lunch based on spring water, eggs and dried noodles; possibly alone in the whole history of quests.

But before I begin my tale, let me set the scene: first of all, there were no actual geese. No right-minded goose would be out in this:

I mean the endless parades of snow ploughs.

Secondly, a natural river onsen sounds like an awesome thing to visit. Take a shovel, they said, and dig your own bath. Your own bath! Witness the bubbling of hot spring water as it emerges from under the river bed, right next to your skin. Reflect on the surrounding beauty and wilderness and various suspension bridges and hydroelectric stations and so on. Bring your own eggs.

Well, the eggs bit is mine – having experimented with onsen tsumago in more controlled environments, following up outdoors was just a logical step. That’s the third point. I also packed dried noodles, to go with the eggs*.

Lastly, I specifically read that Kiriake Natural River Onsen was “enjoyable any time of the year“, which admittedly doesn’t mean you’ll enjoy driving to and from it, bathing outdoors at it, or cooking eggs in it during the dead of winter, but at the time I couldn’t imagine what other features would invite such pan-seasonal praise. (Turns out the answer is scenery, plus indoor onsen and friendly cat.)

Post-lastly, post-lastly: as I said many times to my gaggle of skeptics on the morning of our departure, hot water melts snow, and nature doesn’t close. What misfortunes could possibly befall us?

Japanese civil engineers helpfully accounted for my lack of foresight on that question by providing avalanche protection.

Thus and thus, with a confusing print-out of google map directions in one hand and a GPS system operable exclusively in Japanese at the digital extensions of the other, we set off for Kiriake Springs through the ice and the snow. The main highways were easily navigable – they’d been scooped of their precipitation back when we were still faffing with the luggage: 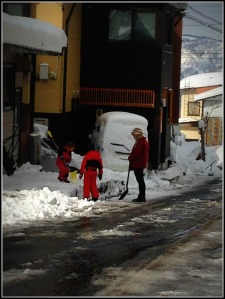 and/or keeping the kids entertained by playing “let’s shovel the snow”, which I presume gets old pretty quickly when your kids grow up with the stuff, but luckily mine haven’t

…and even the little roads had been cleared regularly enough. We were packed, with our bags, in a four-wheel-drive van equipped with snow tyres; a man at the wheel who’d been taught, by the Australian Army, how to operate vehicles of up to forty tonnes with fifteen speed gearboxes (plus a two speed differential) across ice and, especially, mud; and a well-signposted route:

There was a point, as the second hour of our 1.5-hour-long journey slid inexorably into the past, at which a feeling of trepidation began to creep in; then a public bus trundled by in the opposite direction and we realised we were just hungry and we broke out the dried noodles.

So, like this, we forged onwards until the government roadway met a wall of snow taller than our vehicle. 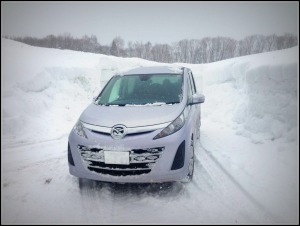 Someone suggested turning back. Another brightly commented – with a glance, I’m sure, in my direction – that it had certainly been a very nice drive, all the same. Scenic.

I glanced at our eggs, cradled snugly on my lap, and stared around at the dried noodles, most of which had been ground into the children’s car seats. It started to dawn on me that the whole caper might have been for naught the picturesque journey past small, mountain villages with houses built sensibly off the ground to keep them above the enormous piles of snow that nobody was surprised about except me naught. Then a flash of inspiration struck. “That home-made orange sign we passed back there.”

“The one that pointed down a narrow, windy backroad from which it looked as if no return was possible?”

We retraced our wheel tracks and pulled up alongside the sign. Suddenly, before he could help himself, A blurted, “Kiriake Onsen. It says Kiriake Onsen, down here.” He was dredging through his knowledge of Chinese and supplementing it with some pattern-matching off the google map, and for a split second he was triumphantly proud of himself. “But, you know, we totally shouldn’t…”

It was too late. We had faced terrible maps, foreign-language GPS systems, snow ploughs, road blocks, icy roads, falling snow, hairpin turns with public buses coming the other way, short-notice roadside toilet detours atop freezing cliffs, submerged signposts, noodlepalooza, and actual walls of snow, and we weren’t going to be defeated now. We were going to be defeated half an hour down the narrowest, iciest road yet when the secret natural river onsen of Kiriake appeared before us featuring unscalable depths of snow on either bank, but not now.

Depths of snow which swallow you in half before you can say, “Not there, P! That’s an unscalable depth of snow!”

So we drove on, until at last we reached our stop. “Isn’t it pretty!?” I enthused, trying to deflect attention from the complete unscalability of the nearby depths of snow. “Gosh, there are a surprising number of people here.”

“Well yes, I’m pretty shocked we made it, for a start.”

Half an hour or so passed in which members of our group pointedly asked me what we were supposed to do here now the natural-onsen-eggs-with-noodles thing had so definitively fallen through, and I kept variously directing them to the gift shop, the toilet, the indoor onsen (which would have been more inviting if we hadn’t been onsening it up every night of the trip so far), the snack foods and vending machines, the resident cat (ginger, white and friendly), and the scenery, oh the scenery. Look at the scenery!

Then I broke the good news that the next thing was driving all the way back as we’d come, plus further to Tsumago, but by the costly expressways at this rate because we’d taken a lot longer to get here than google maps had anticipated and we were already running late for dinner at our ryokan and we might not end up getting fed at all, even if things did go smoothly from here on in (unless they fancied some raw eggs). It was worth it for the scenery, though, as everyone repeatedly agreed for the remainder of the drive, although I got the distinct feeling they were mocking me, especially once it grew dark. 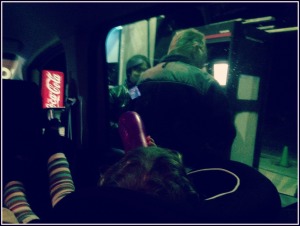 You have to appreciate the panoramas you’re not seeing! Ok, got it, Mum.

There are, so far as I’m concerned, two good reasons to record epic journeys. One is to document events as you’d like to remember them, but I’d be pushing at the bounds of honesty on that one. The other is to draw lessons for next time. I asked A what the moral of this escapade should be, and he decided he was “one Drambuie short of a fable” which I interpreted to mean he’d need a stiff drink before he could bring himself to recall the day too vividly, so I got him a drink and he mused for a while then he complained of tiredness and went to sleep. I don’t entirely blame the drink.

As for me? I’m not sure. I guess there’s a lesson about the feasibility of cooking natural spring noodles and eggs for lunch at Kiriake Natural Hot River Onsen in the dead of winter, but I don’t know how many people that helps. I can’t even tell you if a Mazda Biante “fits” seven people, two in car seats, plus luggage:

So you might have to draw your own conclusions.

If you haven’t already. 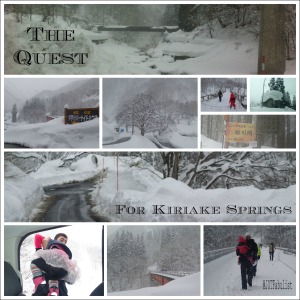 *A only just realised my reasoning behind the noodles. Apparently he’d been wondering why we happened to have so many to hand.

This post was requested by Robin from Around The World With Kids and appeared first at Journeys of the Fabulist. It was shared as part of #SundayTraveler even though spelling it like that did not feel right at all.

63 thoughts on “The Quest for Kiriake Springs”