Ask me if I’m tired.

I’m sorry, I faded out for a moment there, did you say something?

When I originally sketched out the itinerary for this trip, it was fairly simple: fly to Tokyo; go up to ski fields; come back to Tokyo; fly home. And this – let’s be clear before I show you what we actually did – was an eminently sensible itinerary for a multi-generational trip involving seven people with an age range of three to I’mnotallowedtotellyou. Surpassingly sensible. Exceedingly.

Of course I had to swap it for a complicated rail-hop (with pie-in-the-sky side-trip by minivan along icy mountain roads in the snow) because otherwise it would have been like going on someone else’s holiday. Someone who plans enjoyable holidays, yes, but importantly someone else, and I think when it comes to family trips the top priority is to feel like you’re really with the people you’ve come to know, love and think twice about going on holidays with.

I brought along a nice folder packed with spreadsheets, handouts, and itineraries, but I fooled no-one.

Let me give you an overview before we get into the details.

Who Went? Mum, Dad, Grandma, Grandad, Nanny (other Grandma), one 3yo and one 5yo.

Review: Far-too-hectic dash through cherry blossoms and snow, organised around the JR East Rail Pass and a desire (apparently) to squeeze more train travel out of it than could possibly be enjoyed by most. Plus a wild goose chase through driving snow by mini van. 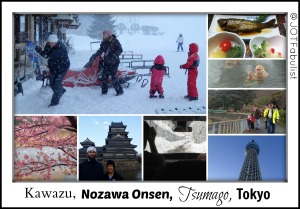 Challenges: A group of seven is a lot of people to keep in the one place at the one time, especially when the age group spans from 3 to I’mnotallowedtotellyou (although I can tell you it’s a multiple of three – about twenty-three multiples, in fact). We probably should have dropped a couple of things from the itinerary to enjoy the others more, or arranged to split up more often. But I’m not sure what, or when, or how. Add thoughts, if you have them.

Price Bracket: Expensive. You can’t take a whole family on a ski trip without spending a few bucks. That said, skiing in Japan compares pretty favourably with skiing in other places for expense, especially if you live in Singapore and it’s one of your closest ski destinations (ask me about my trip budget spreadsheet). 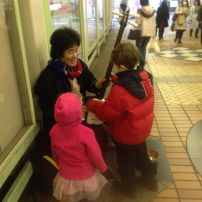 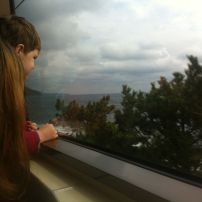 Mum and P take in the Shimoda coastline from their seats on the panorama view train, Shizuoka, Japan.

The Brisbane Party arrived at Narita about 5pm via Sydney and were in Rendaiji a bit after 11pm, after a couple of transport delays and some on-the-spot re-routing by friendly Japanese commuters with smart phones. 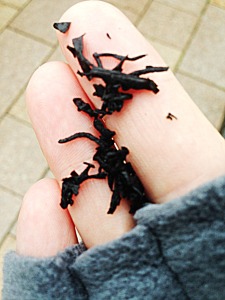 I’m not sure what this is, but I hope you’re supposed to eat it. And if not, you should anyway. Mmmmm.

At some point, I decided everyone should go for more, smaller bags so they’d squeeze in to overhead luggage racks and between the seats of our hire car. As a special bonus, this made it extra-troublesome to spend the whole day taking about seven different trains with two children under five. 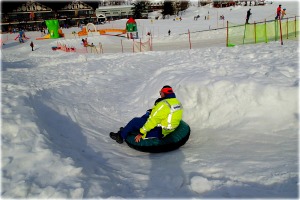 For kids of all ages.

Someone from our hotel had kindly shovelled our car out, probably out of their goodwill and professionalism and not because they were keen to see the back of us.

I also have stories, but I suspect you’ll have to wait til next week, when school resumes and Dad returns. At present it’s urge;navoigjrbugeirab’/reoaGfjm. Sorry, that should read “an effort to stay awake at the keyboard”. In the meantime, I’m open to requests for which bits I should focus on, unless you’d rather leave me to blather on at will about whatever pops to mind.

Read how our itinerary started going awry. I also blame all the wonderful bloggers and websites on Japan for giving me too many ideas for one journey.

Hear about The Quest For Kiriake Springs – a wild goose chase through ice and snow ploughs (as requested by Robin of Around The World With Kids).

See my postcards from Kawazu Cherry Blossom Festival, 2014 (as requested by Sharon of Where’s Sharon).

Ski with terrifying dolphins and visit the Snow Monkeys (as requested – minus the dolphins – by Richard of Living In The Langhe).

Find out how to take a bath in Japan, possibly whilst cooking an egg (not requested, just a bonus).

All this and some pre-trip planning and cultural notes under my Japan blog label or (with extra appearances from around the web) on my Japan Pinterest board.

This post appeared first on Journeys of the Fabulist

← Bathing and Cooking Eggs in Japan: not as unrelated as you might think
Helicopter Swimming →