I’m a terribly stingy mother. P didn’t have a proper birthday party until he was four. To mark the occasion, I decided to do all the stuff you’re supposed to – a theme (sailing the seas); a theme-related cake (island in the ocean); party food (including fish biscuits); games and activities (treasure hunt! but not, he explained earnestly to his friends, because they were pirates, because pirates are too scary, no, they were marine archaeologists); take-home goody bags (sealed with fish-themed stickers); and so on and so forth. I figured I’d follow the same course for T, but I hadn’t counted on her big brother.

“She shall have a party!” he insisted a year ago at the last possible moment, as if he was her wingless, non-magical fairy godmother in shorts. “With cake! And party bags! And lollies! And chips! And soft drinks!”

When I’d finished weeping at the depth of his selfless brotherly affection, I assented and got organising. I had thirty hours to throw together a kids’ birthday do, and I had to spend eleven of them at work and a least a few asleep, so I rushed out a round of invitations and beat a hasty trip to the supermarket, arriving breathless only just ahead of the first guest.

The first half of the two-hour-long affair was spent realising how hot and sunny the playground is at 2pm on a Saturday afternoon, then going home for a tarpaulin and ropes and enlisting the adults to erect a makeshift shelter at some personal risk whilst the children declined to play on any equipment on account of it was the right temperature for frying eggs and instead made a mess of everything by smearing icing and sticky lollies onto whatever surfaces they could find, occasionally including the biscuits I’d bought from the shop as a decorating activity in lieu of a fancy birthday cake.

Then just as we finished the shelter, a fierce wind picked up and a storm blew in. The second half of the party was spent hastily dismantling everything and herding the kids to the nearest undercover area. The nearest undercover area was by the pool. Without warning, all the children flung themselves into the water fully-dressed, including T, who couldn’t swim yet which was why I hadn’t arranged a pool party in the first place. So A jumped in after her – also fully dressed – and fished her out just in time for the lightning to start, at which point it became one big game of counting between thunder claps so we could make our way safely-ish through the rain for towels/dry clothes/ferrying of people into cars.

On the way home, a friend’s daughter pronounced it The Best Birthday Party Ever.

There’s a lesson in this. You can spend hours of work and hundreds of dollars on smart venues, professional entertainers, gourmet food, whizz-bang favours, and the other accoutrements of well-orchestrated birthday fun, but nothing will beat the thrill of watching adults run around like chooks with their heads off making arses of themselves, possibly by jumping into pools fully clothed. Or, it doesn’t take much to make a great kids’ birthday party. One or the other.

A non-competitive children’s birthday aftermath – finally getting around to those candles.

This year I narrowly missed out on a weighty responsibility – being the parent with the eldest child in the class; the one who sets the party bar for all others to leap over, or perhaps limbo under. Luckily, one of the other parents of T’s class took that role last week (I’d thank her personally, but I’m not sure which one it was: “T, which one of your kindy friends had a birthday today?” T {confused look}: “Yeah, it was one of my kindy friends! I got a party bag!”) and to my relief, she did a fine job of keeping the arms race under control. Random-kindy-kid’s goody bag included some sultanas, some child-friendly organic snacks, and a foam craft activity. And not, for example, free iPads for all.

This week, I’ve put together a modest goody bag of our own: a small tetra-pack of milo, sultanas, a little bottle of bubble-blowing stuff, a crazy straw, and some printables recently shown me by Elle of Life In Japan With Toddlers (thanks Elle!). 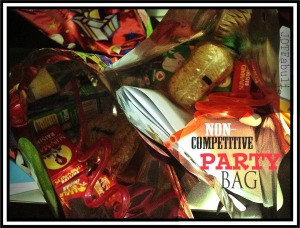 I admit it doesn’t pin as prettily.

Soon, and not entirely by coincidence, T will be officially old enough to join a ski class at certain resorts in Japan. Thoughts to cling to when she starts acting three. As for her big brother  – he hasn’t hassled me for another party this year. Instead he’s convinced me his sister would very much enjoy – as a special treat for her on her birthday – a visit to the Singapore Air Show. Truly, the boy is a saint.

The post Non-Competitive Children’s Party appeared first at Journeys of the Fabulist and was shared as part of Countdown In Style week #22.

55 thoughts on “The Non-Competitive Children’s Birthday”