In the beginning, I was smug. We’d been in India several hours, and (upon questioning) A had described it as “a lot like Singapore, so far”. This was, of course, my plan – cushion the culture shock with an easy introduction involving metred taxies, apartment hotels and dips in the pool – and it seemed as if I’d executed it perfectly, like a rock star. A rock star whose main talent was actually travel logistics, which is saying something, because the music business is pretty tough, so you have to be very talented at being a rock star already, never mind being even better at travel logistics.

No, you are the rock star! The kids are pleasantly unchallenged in their room at our two-bed Empire Suites apartment.

Several hours later (after marching the troops through the streets in homage to Bangalore’s past as a British garrison town, and not at all because I accidentally turned us the wrong way coming out of the hotel) I realised some of the credit belonged to Benguluru itself. It’s not really a coincidence that our internationally-based colleagues invited us there for a wedding. Every second parent at the playground under the MG Road metro station (hat tip vinoddsa for putting us in the know) had spent at least a few years living and working as an expat in some foreign city somewhere, probably doing either finance stuff or IT. There’s  even a Krispy Kreme. (Although, based on our experiences at the local KFC and McDonald’s, they were probably selling chilli donuts.)

And then P and I went on a side-trip to Malpe Beach where, excepting a few folk who were trying to sell us something, everyone we spoke to was from Bangalore.

Literally piles of people from Bangalore at Malpe Beach.

There’s a lot of things I want to talk about, like the wedding, and the culture, and the food, and the geological formations at St Mary’s Island, and the socioeconomic landscape as we observed it, and the plan P came up with for electrifying the entire rail network of India using battery-operated engines, and the metro system, and the bathing facilities at Malpe Beach, and the way the kids entertained themselves, and the travel wisdom we gained, and the shopping, and the FACT THAT WE BOARDED AN ACTUALLY-MOVING TRAIN but if I unpack this on you all at once you’ll feel like I did when I suddenly witnessed the amount of laundry we’d created at the end of the trip. So let me start simply, with an outline, and I’ll fill it in from there in posts to come. 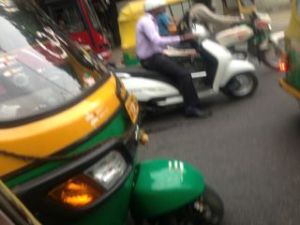 Review: A not-very-touristy itinerary centred around a wedding. Lots of spending time with friends and just sort of hanging about soaking up the atmosphere. Mum and the 5yo took a side-trip by overnight train to Malpe Beach.

Highlights: The wedding. Of course the wedding. And the side-trip to Malpe Beach. And the hanging about with friends.

And not, for some reason, my exquisitely-organised route march.

Challenges: This trip went more smoothly than I expected. Yes, the kids a) weren’t 100% sold on the local food despite preparations and b) got a lot of attention from people wanting to take their pictures (which P in particular hated), but Bangalore is a pretty cosmopolitan city, with less hustle than I remember from travels elsewhere in India, and P managed the train journeys remarkably well.

We tackled the food front by allowing them to eat mostly bread with very little on it, allowing elderly gentlemen on the street to supply them with candy for throwing tantrums in demand of bubble gum (top parenting moments of 2013), and keeping them well-supplied with mango lassis. We also tried visiting various fast-food chains, but they’ve localised their menus by adding chill to everything, so that wasn’t terribly successful.

We never did find a good solution to the constant requests for photos, unless you count smiling apologetically, explaining the children’s shyness, offering to pose for the photograph ourselves, and trying not to be offended when that offer was met with reluctant disappointment. Oh no wait, we did – the solution is to designate the shy child as photographer and have him happy-snap everyone else. Pity we forgot about that brilliant solution about five seconds after hitting upon it.

Instead of shouting aggressively about not having his picture taken, P snaps a group shot, after which we all completely forget how satisfactory this solution is for everyone concerned.

Luckily, P found his own ways to deal with his culture shock, like asking for detailed physiological descriptions of the process of post-mortem decomposition, writing and illustrating a picture book called “The Whale Dies”, and penning a short poem about the eventual doom of our solar system. So. Better than expected. Although his response might owe something to the fact that, when he asked me for the hundred and thirty-sixth time whether that bindi/mehndi was going to be there FOREVER I snapped and replied that of course not, at some point our mortal days would end and, eventually, the sun would morph into a red giant and swallow the earth. (I’m not sure where the whales came in but perhaps it’s an unconscious Hitchhiker’s Guide reference.) 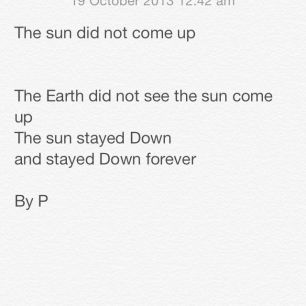 T in her “ballerina dress” using her binoculars to search for worms and lizards at the wedding ceremony (A’s feet in background).

Boatloads of tourists (mostly from Bangalore) at St Mary’s Island, off Malpe Beach.

A will name this central Bangalore market for you in the comments. Won’t you A?

More detailed thoughts and observations coming as I collect my thoughts this weekend. That’s how sharing I am.

← Everything and the Big Reveal
Being On Malpe Beach (Story at Top, Guide At Bottom) →

17 thoughts on “Bangalore and Malpe Beach”